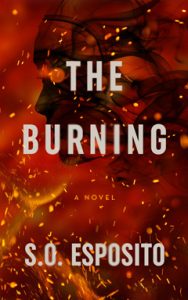 Over the past few years, a character named Alice has haunted me. She made her debut in a piece of flash fiction I wrote in 2011 called Mario’s Goddess. She now officially has her very own full-length story in my new psychological suspense, THE BURNING.

This book came to me differently than my cozy mysteries, and it’s a much darker tale. In the flash fiction story, Alice is the goddess of war and is locked up in a mental institution. Over the past couple years, her character wouldn’t leave me alone, but I didn’t know what she wanted. What were the opposing forces in her life? What was her story?

Some of her life came to me in pieces, scenes actually, that I dutifully wrote down over the years. She was a mother with two small children. She was orphaned at birth, spent her life in and out of a children’s home. She couldn’t remember anything before her thirteenth birthday. I have to say, she confused me. Was she a goddess of war? Was she a human mother? Was this a fantasy story? Magical realism? Paranormal? And then it hit me. She was both a human mother and the goddess of war, and this was a psychological suspense. They don’t call it multiple personalities anymore, now it’s called dissociative identity disorder, and this is what Alice has. Or does she? (I’ll let the reader decide) One of her personalities is Kali, the goddess of war, and she insists she’s a goddess having a human experience. She’s also the one who gets Alice in serious trouble. Arrested for arson and murder, in fact.

As more of the scenes came to me, I knew Alice/Kali needed an antagonist, but what kind? Enter the 2016 Presidential election where America elected a man who was repeatedly accused of sexual assault and bragged about groping women on tape. (Whatever your political leanings are, we can all agree this behavior is not acceptable.) Kali rose up and said HIM. So, I had a template for Alice/Kali’s enemy and the rest of the plot unfolded from there.

It wasn’t my intention to tackle sexual assault and human trafficking but that’s where Kali led me, and who am I to argue with the goddess of war? It seems kind of serendipitous to me that she led me down this road just as the #Metoo and #Timesup movements arrived.  I’m excited that this book can add to the conversation and hopefully the healing process for all women.