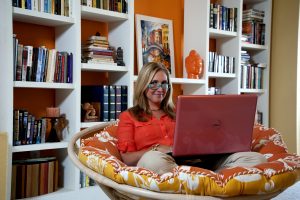 S.O. Esposito began her writing career as a cozy mystery author under her full name, Shannon Esposito. She has four books in the PET PSYCHIC SERIES (misterio press) & two books in the PAWS & POSE SERIES (Severn House). But to keep her muse happy, she’s ventured into darker territory with her suspense debut THE BURNING.

THE BURNING was inspired by a piece of flash fiction she wrote in 2012 called “Mario’s Goddess.” In that story, the goddess of war–in the form of a human named Alice–had been locked up in a psychiatric hospital, but over the past few years Alice has insisted on telling a longer story. So, Shannon had her main character, but the story needed an antagonist and a question to explore.  Enter the 2016 presidential election where America elected a man who’d been accused repeatedly of sexual assault and bragged about groping women on tape. Knowing that one out of five women in the US experiences sexual assault, Shannon was heartsick, but it did inspire both an antagonist and a plot question:

How would the goddess of war handle a rich, powerful man who thought he could just grab what he wanted?

Though THE BURNING deals with sexual assault, it also offers women hope that things can and will change. Shannon is grateful that the “Me Too” and “Time’s Up” movements are already changing things, and she’s excited that THE BURNING is timely enough to add to the conversation.

She lives in the sunny state of Florida with her husband, twin boys and two mastiffs, where she is an avid reader, beach-goer and lizard wrangler.

If you’d like to learn more about Shannon’s cozy mysteries, please visit murderinparadise.com